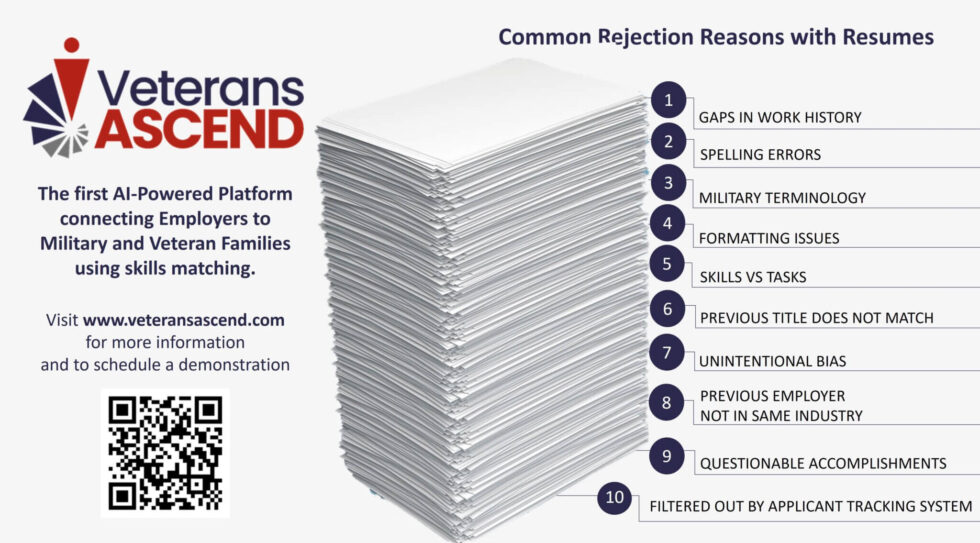 The Issue with Resumes

Putting one’s professional history and career accomplishments into a resume can oftentimes feel overwhelming. It’s hard enough to summarize job titles, skills, and performance in a limited number of bullet points let alone having to recall the endless contributions one has made to all of the roles they have played in the workforce over years or decades. To add insult to injury, resumes are rarely read by human beings anymore, which makes the resume one of the most outdated and dehumanizing parts of seeking employment, especially for veterans and their spouses, whose work titles and skills cannot be accurately summarized onto a piece of paper or PDF file.

Choosing the right words to describe one’s ability to successfully execute assigned tasks is no easy feat. A focus on resumes can create unfair hiring practices, barriers, and biases, giving priority to those that can afford resume writing services and proofreading technology while rejecting candidates with disabilities, foreign nationals, older populations, and other candidates that may bring exceptional talents to the workforce, despite a sentence structure issue, spelling error, or formatting mistake on their resume.
Furthermore, resumes make it impossible for hiring managers to truly grasp the scope of a candidate’s professional accomplishments and ability to perform the duties for which they are hiring. Resumes focus on job titles, company names, and a brief description of the job itself. The standard resume format fails to highlight the reasons why a worker might outshine another in a real life situation. Military veterans, for example, are some of the most well-rounded and capable workers in the workforce due to their extensive training and exposure to various leadership and collaboration roles. Yet, the resume of a military veteran may be overlooked simply because the scope of their experience cannot be adequately conveyed on a resume.

As if the practice of requiring resumes weren’t antiquated and restrictive enough, resumes are rarely viewed by a human being until a candidate pool has been significantly narrowed. Most companies ask for resumes to be uploaded to online applicant tracking systems that review resumes using artificial intelligence that seeks out keywords including company names and job titles, eliminating valuable candidates that have worked outside the industry or have gaps in their employment, yet bring dynamic experience to the organization.

Due to the use of resumes as a first step in consideration, highly qualified candidates are being excluded from roles in which they would excel. For many, resumes present a barrier to getting an interview and, therefore, lucrative employment. Instead, employers must consider using more objective hiring tools that focus on candidates’ abilities and skills, highlight the ways in which their talents can be used to further the organization’s mission, and humanize the hiring process. One such tool is Veterans ASCEND, an innovative system that matches employers with veterans and military spouses based on skills. To learn more about Veterans ASCEND, contact 864-887-5865 or findtalent@talentsascend.com.